TELL ME ABOUT ROTHAUS & ZÄPFLE DAY

WHAT IS ZÄPFLE DAY? WHO IS BIERGIT?

2022 marks the 50th Anniversary of Biergit, Rothaus’ iconic Black Forest girl, and face of the beloved brand. It also marks the inaugural year for Zäpfle Day, which will take place annually on the second Saturday of each May, kicking off spring, and pilsner drinking season (as if you needed an official day…). Who’s Biergit? Mentioned above, Biergit is Rothaus’ Black Forest girl that adorns the brewery’s branding and was first introduced in 1956 through a photorealistic illustration (shown below), and then re-designed in 1972 to appear the way she does today. Her name, ‘Biergit Kraft’, translates to ‘Beer Gives You Strength’ (yes, that’s right). Prost! 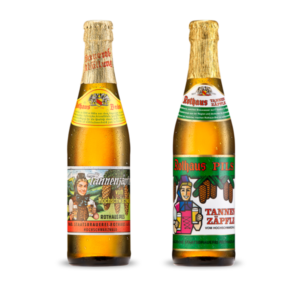 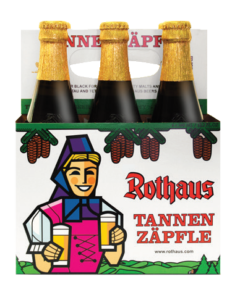 WHAT DOES TANNENZÄPFLE MEAN?

Depicted on, and referenced seven times on the beer’s label, Tannenzäpfle translates to “little fir cone”. Interestingly, instead of hanging downwards as shown on the label, in nature, these Norway Spruce cones, or as they’re referred to in the Black Forest, “Red Fir Trees” grow upwards from their branches. The inverted position of the cones on the label is commonly noted to be like the position of a beer bottle while it’s being consumed. 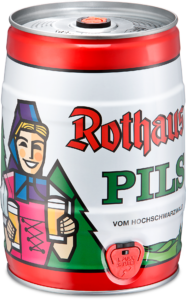 WHAT IS TANNENZÄPFLE PILSNER?

The Rothaus Tannenzäpfle is the absolute classic among our beers – and has been since 1956. It is also the namesake and figurehead of the Zäpfle family. The best aroma hops from Tettnang and the Hallertau as well as local malt made from summer barley and the purest spring water from the Upper Black Forest give the Rothaus Tannenzäpfle Pilsner its uniquely spicy and fresh taste. (5.1% ABV)

Rothaus Eiszäpfle (Märzen) sources the best barley malt from southern Germany, spring-fresh brewing water and the famous aromatic hops from Tettnang and the Hallertau that characterize the full-bodied taste of this beer. A higher original wort and a rather mild hopping ensure the distinctive, malty note. (5.6% ABV)

The term “March or Märzen” should also be mentioned. Beers of this type of brewing are traditionally brewed to a greater extent, since brewing was only permitted in the months from September to April. A longer-lasting beer was thus produced in March, which also survived the five months without a brewing process.

Available in select locations year-round on draught, and in 6pk bottles/draught in August – October. 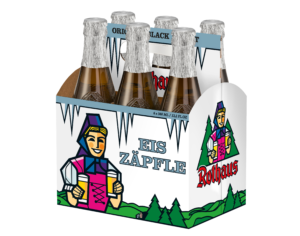 HOW OLD IS BADISCHE STAATSBRAUEREI ROTHAUS?

Badische Staatsbrauerei Rothaus is over 230 years old. In 1791, the Rothaus brewery was founded by the Benedictine Monastery of St. Blasien.

WHERE IS BADISCHE STAATSBRAUEREI ROTHAUS?

Badische Staatsbrauerei Rothaus is located in the Black Forest, southwestern region of Germany, and is owned by the German state of Baden-Württemberg.