ABOUT
We Started brewing in Burton-Upton-Trent in 1834. Then in 1898 we got itchy feet. So we moved down the road to the Albion brewery. We still like it so we’ve not moved again since.

We came to Burton for the water. Well, for the rocks the town was built on to be precise. The water trickles down through a thick layer of gypsum before we bring it back up again through our well. That’s what gives out beers the depth and flavor, character and crisp refreshing bitterness that you won’t find anywhere else in the world.

Scotland has Whisky. Detroit has cards. Burton has beer. And we’re the oldest brewer in town.

McEwan’s Scotch Ale – One of the most successful and best-loved beers from the Fountain Brewery was McEwan’s Scotch Ale, fondly known as “Red Top” by its legion of fans. The beer was remembered for its unique and distinctive tartan packaging, which is now protected on The Scottish Register of Tartans as ‘The McEwan 1856’ by the renowned Scottish tailors, Kinloch Anderson.McEwan’s Scotch Ale has gained a fiercely loyal following throughout the years, especially in North America; and its rebirth is a direct result of customer demand. The Charles Wells Brewery has resurrected this iconic beer using the original recipe that made it so famous.  ABV 8.0%

Eagle Banana Bread Beer – This unique brew combines all the traditional qualities and style of a Charles Wells beer with the subtle flavour of banana. It is one of the first Banana beers to market, and is brewed using fair trade bananas. ABV 5.2%

Whychwood Hobgobin Ruby Red – Traditionally crafted, Legendary Ruby Beer. Not for Lagerboys! Brewed with chocolate malts and a blend of Styrian, Goldings and Fuggles hops. A unique and mischievous brand character, with an appeal that is more accessible to recruit new drinkers to the category than more traditional beer brands.

Please use the Product Finder  to locate Marston’s beers in your area. 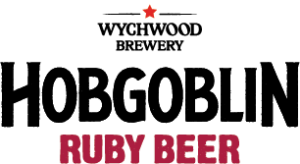