ABOUT
Founded in 1398, the Priory of Corsendonk in present-day Oud-Turnhout comprised a rather important brewery and malt house. The Corsendonk monks famously brewed the beer as a contemplative practice. After the Austrian Emperor Joseph II shut down the Priory of Corsendonk in 1784, the brewing of Corsendonk beer changed hands throughout the course of a century. From 1982 onwards, the Corsendonk beer regained its fame and the simplicity of the packaging acts as an emblem of the middle ages and Corsendonk’s rich past.
Since its regain of fame, Corsendonk beer has been traditionally brewed in the craft breweries of Du Bocg in Purnode in the Belgian Ardennes. Corsendonk can boast the label “Brewed and Bottled in Belgium” and is brewed exclusively with all natural ingredients, which include: pure water, malt, hops, yeast, and herbs (coriander, dried orange rind, and cinnamon). Bottled Corsendonk is fermented twice; the first fermentation takes place in the brewery’s fermentation tubs, and the second fermentation is in the bottle itself.

Corsendonk Agnus – Brewed with all natural ingredients, including 93% barley malts (Plaisant and Triumph) and 7% wheat, and Sturian Goldings, Hallertu Herzbrucker and Kent Challenger hops. Beer authority Michael Jackson describes Corsendonk Agnus as “Dry, with a great deal of finesse. A deceptively potent ale in the golden, “Triple” strength style of Belgium’s Trappist monks. It has a very big head indeed-pour it gently- and a very clean palate, beginning with a dry, lightly citric fruitiness, and finishing with a distinctive and delicate, perfumy, hop character. Very light and fluffy in texture, giving little hint of its strength. This beer has living yeast in the bottle, and will evolve with age, becoming softer and cleaner.

Corsendonk Pater – Brewed with all natural ingredients, including Caramel, Pilsen and Munich barley malts, and Saaz, Kent and Hallertau hops. Beer authority Michal Jackson describes Corsendonk Pater as “A strong, Burgundy-colored ale in the style of the classic Trappist brews of Belgium. Has a very distinctive bouquet: yeasty, fruity and slightly smoky. In palate, it has notes of port, raisins and black chocolate. Matures greatly with age, becoming softer, smoother and deeper in palate. Ideally, should be stored for at least a year, and could mature for at least five.

Corsendonk Apple White Beer – Corsendonk Apple White Beer is a compact, creamy beer with a lingering froth. With aromas of yeast and apple, it is mild on the palate with well-balanced bitterness and hints of apple. It is excellent as an aperitif or as a thirst-quencher. This top fermented White beer is brewed with water, pale malt, hops, yeast and apple juice. It is spiced with coriander, orange zest, and licorice, and is unpasteurized. Deep golden in color and naturally cloudy, this bottle-conditioned white beer is fresh, crisp and exceptionally refreshing.

Corsendonk Christmas Ale – Brewed with Pale, Munich and Caramunich malts; Kent Goldings hops. This is a rich, dark, joyous brew with which to celebrate the holiday season. It’s aroma of chocolate malt and spiciness is reminiscent of the wonderfull smells of holiday baking in Mom’s  kitchen. Silky smooth on the palate, it’s predominantly malty, with smoky, spicy and citrusy notes and a long, lingering finish that is lightly tart and malty. Bottle conditioned for a fresh, lively taste. Round and well balanced, it’s a welcome addition for holiday tables and beyond.

Please use the Product Finder to locate Corsendonk in your area. 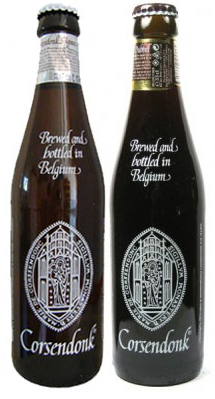